Kobudo, the ancient Okinawan martial art of farming and fishing tools for self-defense has been so effective, that many law enforcement agencies around the globe adopted many of these tools for their line of work. One notable tool was the tonfa, a side handle baton that replaced the common ‘Billy club’ for a few decades until the expandable baton was introduced. But even the expandable baton, known as a kibo and referred to as ASP, has a Japanese martial arts association. For instance, the hanbo, a 3-foot baton, is used in many styles of traditional jujutsu and ninjutsu and is even used in some styles of Shorin-Ryu Karate. Other similar tools include nitanbo and kobuton.

Other kobudo tools, or weapons, include an unusual fork-like weapon known as sai. The sai is a classical kobudo martial art weapon and one of the hardest to learn. Even so, members of Seiyo No Shorin-Ryu Karate Kobudo Kai at the Arizona Hombu in Mesa tested for certification with this weapon. To certify, the group was required to demonstrate four separate advanced kata (forms), bunkai (self-defense applications) and ippon kumite (sparing). Six martial artists from the martial arts school successfully passed exams and were awarded certification in this complicated weapon. The six included Adam Bialek, Sensei Bill Borea, Amanda Nemec, Ryan Nemec, Alexis Pillow and Sempai Patrick Scofield.

Patrick Scofield was promoted to gokyu (green belt) and Ryan Harden was promoted to sankyu (brown belt) at the Arizona School of Traditional Karate in Mesa and Gilbert, Arizona after demonstrating several kata (forms), kobudo (weapons), and self-defense against armed and unarmed attackers. The above photo shows Ryan Harden (right) training with Shihan Adam, 5th dan.

Within the East Valley of Phoenix, the Arizona School of Traditional Karate (also the world headquarters for Seiyo-Kai Shorin-Ryu Karate and Kobudo) located at 60 W. Baseline Road in Mesa (near Country Club Road) welcomes visitors.

The Arizona School of Traditional Karate is a traditional Okinawan karate school with typical Japanese décor. Stop by and see us and see why we have so many dedicated members.

In the upcoming weeks, we are planning several clinics and events along with our normal class schedule. The majority of our classes are geared towards teaching adults in self-defense and the traditional art of Shorin-Ryu Karate and Kobudo, but we also teach Japanese samurai arts. We also have an award-winning kids karate class, but this class is restricted to a handful of students who have first trained with their parents in the family classes.

In the upcoming weeks, we are looking forward to visitors from the Utah Shorin-Kai who will train at our school under Professor Hausel and study Okinawan forms and self-defense applications. The group will fly into Phoenix on May 28th and train for the next few days in Mesa.

This will be followed by a special clinic for non-martial artists – the general public is invited to learn self-defense at our school in Mesa on Saturday May, 7th as Hall of Fame martial artist, Soke Hausel teaches the public another use for their knees, elbows and even car keys. Soke Hausel is well known for clinics taught to the public. He was awarded the North American Black Belt Hall of Fame’s 2001 International Instructor of the Year and the American Karate Association’s Hall of Fame 2004 Instructor of the Year.

Another clinic is scheduled on the weekend of May 14th, when members from Colorado, Nebraska and Wyoming will train under the Hall of Fame martial artist in Okinawan Yari (spear) and Kotekikai (body hardening). This clinic is only open to members of Seiyo Kai International.

This will be followed by a visit from the Police DAV karate team from India who are heading to Mesa to train in martial arts.

Last week, two members of the Arizona School of Traditional karate tested for rank advancement, while other members from Utah, Wyoming and Vietnam also tested for rank and were promoted by Soke Hausel.

In further news, the Hombu in Mesa was rated as having the TOP-RATED KARATE classes in the Phoenix Valley.

Karate and Kobudo Classes in Mesa and Gilbert

"I'm always looking for ways to help market my Traditional Okinawan Karate and Kobudo training services. Thumbtack is a good way for me to help me show off my expertise in traditional Okinawan Shorin-Ryu Karate, Kobudo, Samurai arts and self-defense. Check out my listing to learn even more about what I do!"

Brought to you by

KARATE in the PARK

Come join us each month as we teach simple and practical self-defense applications at no cost (FREE) to members of Arizona School of Traditional Karate in Mesa, Seiyo No Shorin Ryu Karate Kobudo Kai, Seiyo Kai International, and friends and family of our members - its free if you know someone.

Our first session will be Saturday, January 29th, at 8:30 am to 9:15 am. This session, held on the shoreline of McQueen Park in Gilbert, will focus on how to defend against wrist grabs. These defenses are all simple and designed for the non-martial artist as well as the martial artist. The clinics are all taught by Grandmaster Soke Hausel, a member of the North American Black Belt Hall of Fame & the World Martial Arts Black Belt Hall of Fame. Professor Hausel has taught self-defense for 40 years.

We recently finished a group of successful self-defense clinics at universities for martial artists & the general public: we all had a great time. Earlier this year, we taught self-defense clinics to special groups who flew into Phoenix to train at the Arizona School of Traditional Karate in Mesa in the East Valley.

Statistics show that ~25% of women will be sexually assaulted during their college career. Violence on campuses are out of control. Recently, a woman was dragged to death in Tempe and a straight-A male student was murdered by two thugs simply for his computer and cell phone. These are very sad commentaries on our society and the only way it will change is with swift capital punishment (which isn't going to happen thanks to our liberal court system) or by arming all good people with weapons - including empty hand self-defense training.

Not all self-defense training will be successful, but it definitely increases your chance of survival. Just think about using your hands, knees, elbows, keys, book, etc for weapons! But one must continue to practice and train in self-defense - it must become a lifetime commitment.

You can read about our recent clinics at: (1) Karate Clinics, (2) Self-Defense Clinics, (3) Clinics, (4) Airline Traveler Self-Defense, & (5) specialized training in the East Valley of Phoenix.

Our clinics are successful due to the combination of our Grandmaster who has taught martial arts for more than 4 decades and who is also an award winning public speaker. Most martial artists tend to teach complicated techniques to the public - however, Soke Hausel focuses on simple and pragmatic techniques to insure one can easily use the technique in real life situations. 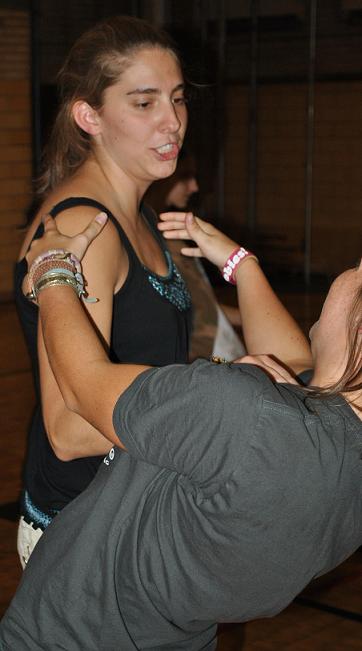