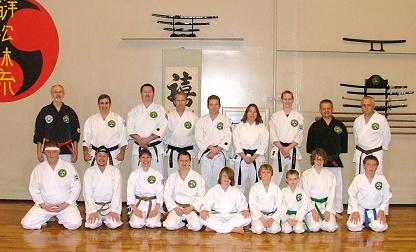 Thumbtack.com rated the Arizona School of Traditional Karate in Mesa and Seiyo Kai International Hombu as having the #1 and #2 Top-Rated Karate Classes in Phoenix. How does one receive such a favorable rating? The answer lies in quality of instruction & appearance of the school.

Students attending the Arizona School of Traditional Karate and the Seiyo Kai Hombu in Mesa are treated to traditional Okinawan décor in the Mesa martial arts center. As one walks into the dojo, the school is similar to what one would see in some training halls in Okinawa. The school also focuses on adults and families rather than kids’ karate. Thus adults learn to defend against one another instead of training along side of 5 year old children. In this way, adults can learn basics of karate and much more complex advanced techniques (>150 black belts have trained under Soke along with hundreds of other students). Kids are not neglected, but to participate in the Kids’ Karate Class, children must attend family classes with their parents and later be invited to attend the Kids’ Karate class. Parents who have their kids in this class are impressed by the training – the children are actually taught karate and kobudo rather than games, and they are also required to learn respect and Japanese. Unlike many other schools in the valley where adults may be taught by teenagers, nearly all of the classes at the dojo are taught by the Soke. Many self-defense classes and clinics are taught to martial arts students and to the general public by Soke.

Soke is a term meaning world head, president or grandmaster; thus Soke is the highest ranked martial artist in the world in Shorin-Ryu Karate (Seiyo-Kai). He has 8 different black belt ranks and is a certified 10th degree (judan) black belt in Okinawan Shorin-Ryu Karate and Kobudo. As a result, the students (deshi) get access to Soke’s 46 years of experience in martial arts. Furthermore, Soke has certifications in nearly 2 dozen martial arts – so one will not get bored while training at his schools because there is lifetime of martial arts experience to draw from. The overachiever has been inducted into 15 Halls of Fame for his accomplishments and is a member of dozens of Who’s Who.